Editor's Note: Rather than passing Motion M-103, as they did in March, 2017, Canada’s lawmakers would do well to follow the lead of Idaho, the latest US state to pass an “American Laws for American Courts” bill, which declares void any ruling by a court that relies “in whole or in part on any foreign law” that doesn’t match the US or Idaho’s protections for due process, freedom of religion, speech, press, privacy or marriage. Of course the bill is “Islamophobic,” because i

Editor's Note: Christine Douglass-Williams documents the lengths to which Prime Minister Trudeau is willing to go to curry favour with – and win the votes of –Canada’s ethnic minorities. Opponents of Motion M-103 were concerned about its potential to stifle free speech through the deliberate conflation of criticism of Islam and the promotion of hatred toward Muslims in the term “Islamophobia.” Motion M-103, which received the support of every Liberal MP, and petition e-411 (I

Is there a terrorist out there that Justin Trudeau doesn’t like?

Editor's Note: Just as the passage of Motion M-103 by the Liberal majority government is considered by many to be an attempt to win the Muslim vote without regard to its potential impact on free speech, Prime Minister Trudeau’s association with a convicted Sikh terrorist also seems to have political motives. In his quest to win the political support of Canada’s ethnic and religious minorities – even at the expense of Canada’s interests, Trudeau appears to be willing to suppor

Europe: The Rapid Spread of Dhimmitude

Editor's Note: Judith Bergman describes the “rapid spread of dhimmitude” in Europe as authorities use “hate speech” laws to prohibit criticism of Islam and enforce Islamic blasphemy laws. The Canadian MPs who passed Motion M-103 seem determined to follow in Europe’s footsteps. One of the most troubling aspects of this rapidly spreading dhimmitude, is the de-facto enforcement of Islamic blasphemy laws. Local European authorities have been utilizing "hate speech" laws to prohib

Editor's Note: Christine Douglass-Williams reports that in the UK, Muslim rape gang sex crimes against children are at a record high. She describes how the fear of being accused of racism or Islamophobia allowed Muslim rape gangs in Britain to abuse young girls unhindered by the authorities. One Labour MP, Naz Shah, even retweeted to the abused girls to “shut up for the good of diversity.” "Averaging at 177 cases a day, child sex crime allegations including rape and grooming

History Lessons from Years Under Islamism

Editor's Note: Dr. Majid Rafizadeh, a member of the “burnt generation,” the first generation after Islamists came to power in Iran, describes how they came to power stealthily, deceitfully, and incrementally, and then ruled ruthlessly. He warns against the “it can’t happen here” mentality. Proponents of Motion M-103 should take note. My father's generation in Iran lived in an environment in which the Islamist party of the country's clergy cunningly depicted themselves as inte

Editor's Note: As Guy Milllière reports about France, anti-Semitism has flourished as criticism of Islam has been silenced. No religion or ideology deserves protection from criticism. “Islamophobia” must be recognized as the weapon word that it is and Motion M-103 and the report it generated for the danger they present to free speech in Canada. Graffiti on Jewish-owned homes warn the owners to "flee immediately" if they want to live. Anonymous letters with live bullets are dr

Editor's Note: Giulio Meotti describes European and Vatican appeasement of Islamism, to the point of condoning if not endorsing anti-Semitism. Some fear that the “anti-Islamophobia” motion, Motion M-103 and the recently released report of the Heritage Committee, with its condemnation of “Islamophobia,” which lacks a clear definition in the Canadian context, appears to be turning Canada in the same direction. European officials have been not only mute about the Iranian regime

Editor's Note: Robert Spencer raises a very pertinent question about the reporting of hate crimes, as mandated by Motion M-103 and the Heritage Committee’s report. So many “Islamophobic” incidents are being revealed as hoaxes and yet still used to create a panic about rampant “Islamophobia.” The term “Islamophobia” should be scrapped and Motion M-103 rescinded. Then we hear that “anti-Muslim hate incidents” have increased, when really only the chutzpah and dishonesty of thos

Editor's Note: On the program The Glazov Gang, member of the audience takes offence with Anni Cyrus for discussing her experience of living under Sharia law. He confuses a discussion of the facts with the promotion of hatred. This is the sort of confusion that the term “Islamophobia” can lead to and why Parliament’s passing of Motion M-103 was so misguided. On this new edition of The Glazov Gang, Anni Cyrus is featured in the act of Schooling an Islam-Apologist. The scene oc 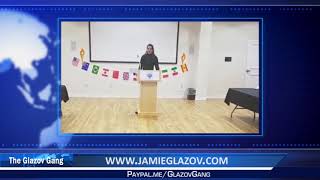